Ireland 2017: A road trip from the Netherlands to Ireland in a 43 year old classic Mini, a 1974 Mini Authi. During our road trip, we visited several World Heritage Monuments and other interesting monuments in England, Wales, Ireland and Northern Ireland. We started our road trip in the Netherlands, drove through Belgium to Dunkirk in France. We crossed the English Channel by the Dunkirk to Dover ferry. In one day, we drove from Dover to Wales. We visited Bodnant Garden and the castles of the English King Edward I in Wales. After spending a few days in Wales, we crossed the Irish Sea by ferry from Holyhead on Anglesey to Dublin in Ireland. In Dublin started and ended our road trip through Ireland and Northern Ireland. We visited these countries several times before, but this was the first time in a classic Mini. Some of the highlights on our road trip through Ireland are driving the Slea Head Drive around the Dingle Peninsula, the Burren, the Cliffs of Moher and driving to Malin Head along the Wild Atlantic Way. In Northern Ireland we visited the Bogside district of Derry, also known as Londonderry. We drove along the Causeway Coastal Route from Derry to the Giant's Causeway. Our last stop in Ireland was the ruin of Monasterboice, a monastic settlement in the Boyne Valley. After our road trip through Ireland and Northern Ireland, we took the ferry from Dublin to Holyhead in Wales. We spent a week in Wales and England, visiting several monuments, such as the former Dinorwic Slate Quarry, now the Welsh National Slate Museum, and the Pontcysyllte Aqueduct in Wales. In England we visited Coventry, the Royal Botanic Gardens at Kew in London and the Chatham Historic Dockyard. Canterbury was the last stop on this classic car road trip. We took the Dover to Dunkerque ferry and after reaching France we drove back to the Netherlands. After more than three weeks and more than 7000 km on the road we arrived home safely. 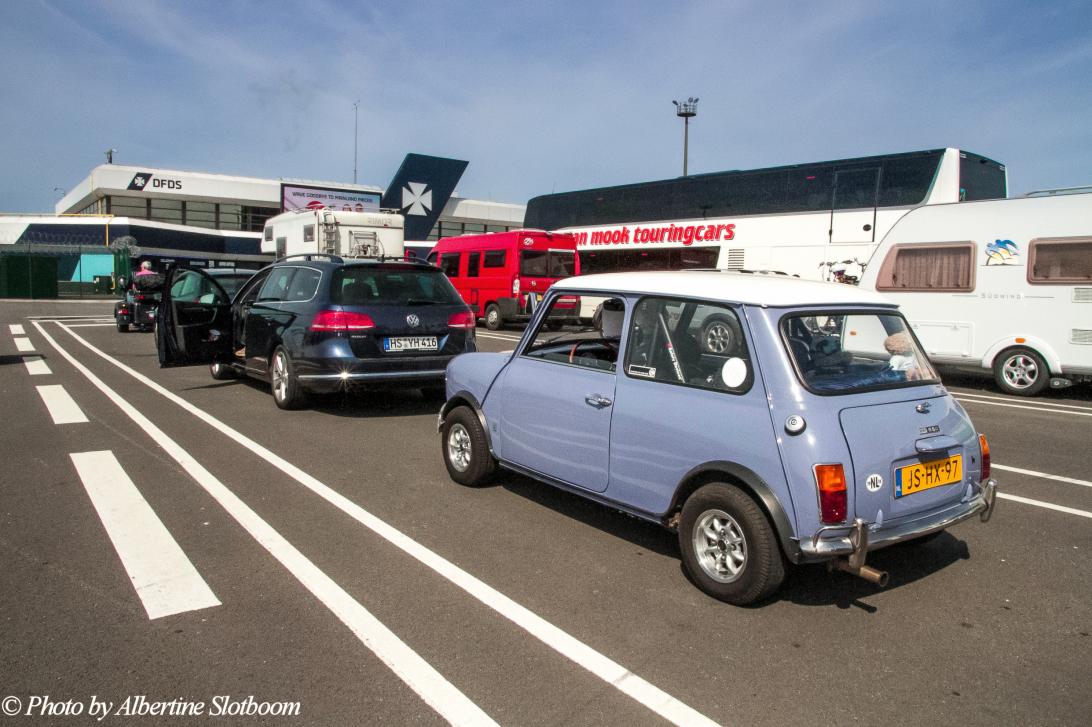 A Classic Car Road Trip from the Netherlands to Ireland in a classic Mini: Our own Mini Authi in the car queue for the ferry, ready for boarding. We crossed the Channel by the Dunkirk to Dover ferry. On our road trip to Ireland, we spent several days in England and North-Wales to visit interesting historic gardens and UNESCO World Heritage Sites.