Classic Car Road Trip: A 1974 Mini Authi on a road trip from the Netherlands to England to attend the 60th anniversary celebrations of the Mini at the International Mini Meeting (IMM) 2019. The IMM took place at Washingpool Farm in Easter Compton, a small village situated about 15 km north of Bristol in Engeland. In a few hours, we drove from the Netherlands to Dunkirk in northern France. We crossed the English Channel by the Dunkirk to Dover ferry. From Dover, we drove along the south coast of England to the small village of West Lulworth to visit the Jurassic Coast and Durdle Door, one of the most iconic landmarks of Dorset. On our way from West Lulworth to Easter Comptone, we visited the City of Bath. The city is known for its Roman baths and well-preserved Georgian and Victorian houses. On eight August, we arrived at the IMM in Easter Compton and stayed there for a long weekend. During this weekend, heavy rain showers and a severe storm passed over the camping. The paths on the camping already turned into mud baths, we drove through the mud to reach our tent. Many tents did not survive the storm. For safety reasons, the huge festival tents were closed or dismantled, also the tent containing the original Mini of Mr. Bean. Despite the rain, we went on a day trip to Bristol and crossed the Clifton Suspension Bridge, we also drove through the Cheddar Gorge. After the IMM, we spended some time in the Cotswolds. After visiting several pittoresque villages in the Cotswolds, we drove to Dover and took the ferry to Dunkerque. In France, we ended up in a long traffic jam. Near Antwerp, we drove straight into a severe rain shower. Despite the dynamo stopped charging, due to the extreme wet weather in the last days, we returned home safely. 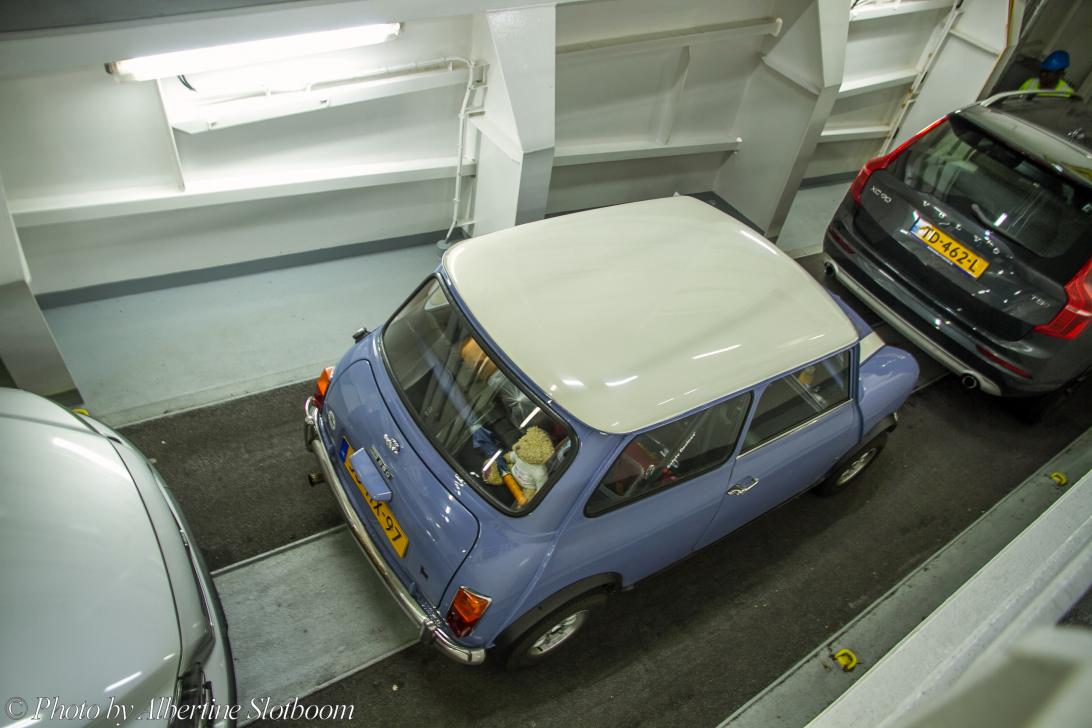 Classic Car Road Trip: Our own Mini Authi on board the Dunkirk to Dover ferry, the Mini made the crossing on a steep slope on the car deck. Fortunately, the parking brake of this 1974 Mini works great and also a set of wooden wheel chocks were used to keep the Mini in place. After a rough crossing, the Mini arrived in Dover without a scratch.