Operation Quick Anger Commemoration 2019: After the Battle of Arnhem in September 1944, one of the greatest defeats suffered by the Allied forces during WWII, the northern part of the Netherlands remained under nazi-German occupation until the 5th of May 1945. In the spring of 1945, the Western Allied forces launched a number of operations to liberate the northern part of the Netherlands, two of them were Operation Quick Anger and Operation Cannonshot. Operation Quick Anger, also known as the Second Battle of Arnhem, was the beginning of the liberation of the northern part of the Netherlands. The First Canadian Army played a crucial role in the liberation of the Netherlands. After the Second Canadian Corps secured the eastern banks of the river IJssel, Operation Quick Anger, started on 12 April 1945. The Allied crossed the IJssel from the east, a branch of the Rhine, at Westervoort. To liberate Arnhem an enormous Allied military force was gathered at the small village of Westervoort on the east bank of the IJssel. Arnhem is situated on the opposite bank of the IJssel. The operation was led by the 49th British 'Polar Bear' Infantry Division, supported by the 5th Canadian Armoured Division, the Royal Air Force and boats of the Royal Navy. The first troops crossed the IJssel in amphibious vehicles, within 11 hours the Allied forces had constructed a temperory bridge and thousands of military vehicles crossed the river to liberate Arnhem. On 14 April 1945, Arnhem was liberated and within a month the whole of the Netherlands. The Second Battle of Arnhem, in which the village of Westervoort has played an important role, has never received as much publicity as the lost Battle of Arnhem in September 1944.

In April 2019, we took part in the memorial tour and memorial ceremony of Operation Quick Anger. Authentic WWII military vehicles and their owners gathered at Vredenburg House in Westervoort for the Operation Quick Anger memorial tour. In our own Ford Jeep, together with other WWII vehicles, we drove through the Liemers and Achterhoek, rural regions east of the river IJssel. The tour ended at the Memorial Crossing to Liberation Monument on the east bank of the IJssel at Westervoort, where we attended the memorial and wreath-laying ceremony. The WWII monument is situated at the spot where the Western Allies crossed the IJssel in 1945 to liberate Arnhem, it is one of the many monuments on the Liberation Route Europe. Since 2011, the memorial ceremony is held at the monument annually to commemorate the contrbution of the soldiers during Operation Quick Anger. In the Netherlands, and even in Westervoort, it is relatively unknown that the village played an important role during the liberation of the Netherlands. During the liberation of the Netherlands, 7,600 Canadian soldiers were killed, they are buried in military war cemeteries across the Netherlands. The largest, Groesbeek Canadian War Cemetery, holds the graves of 2,331 Canadian soldiers and also 256 British soldiers. 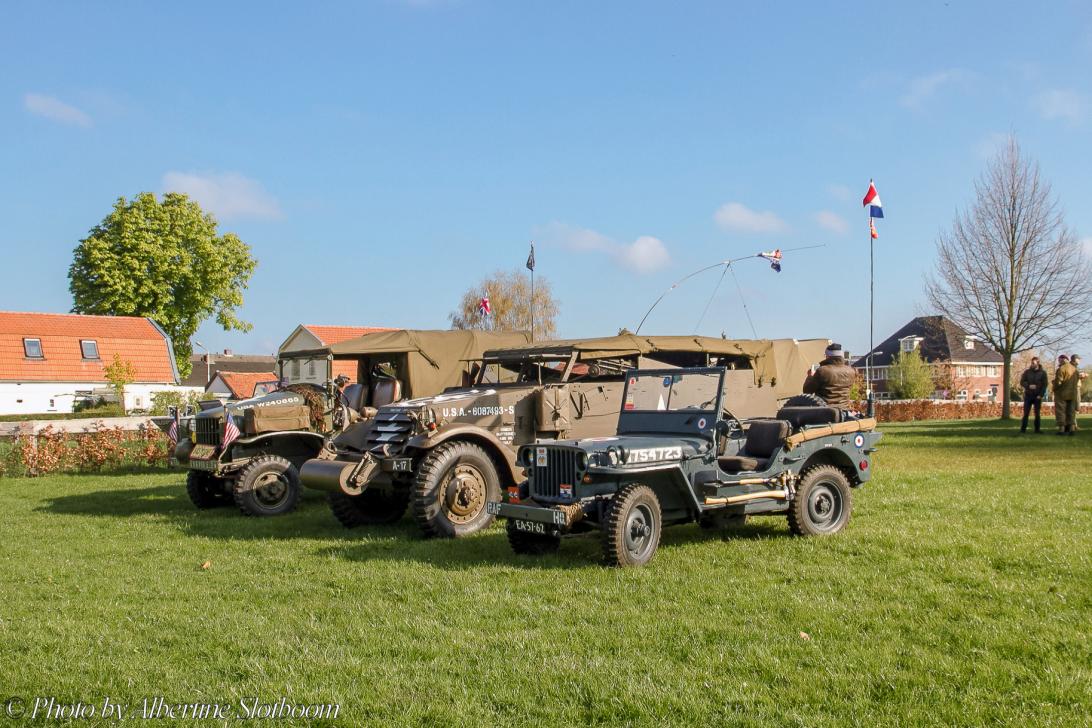